WASHINGTON, DC – Citing safety concerns, today Secretary of Transportation Anthony Foxx announced he was contemplating the closure of roads to all private vehicles in nearly every city in the country until he could assure the nation’s drivers that they would be safe behind the wheel.

The announcement comes on the heels of comments by Secretary Foxx that the Department of Transportation may shut down the Washington Metro heavy rail system because of ongoing safety issues.

Since 2009, 14 Metro riders and employees have died in collisions, derailings, and other incidents. On an annual basis, that translates to about 0.48 fatalities per 100,000 weekday riders.*

However, Secretary Foxx noted that this is exceeded by the fatality rate of car crashes in every single American metropolitan area for which data was compiled in a recent report from the National Highway Traffic Safety Administration.

A partial list of other cities in which Secretary Foxx is threatening to shut down automobile traffic includes:

Each year, more than 30,000 Americans die in automobile crashes, at a rate higher than nearly every other industrialized nation, even accounting for higher vehicle miles traveled rates.

“This carnage is unacceptable,” the Secretary said. “Until we can assure America’s drivers and pedestrians that they are no more likely to die on the road than they are on the most dysfunctional heavy rail system in the country—a feat that, in many cities, will require a 90 to 95 percent reduction in road fatalities—I cannot in good conscience allow a single motor vehicle to menace our cities.”

*Methodology and sourcing: Road fatality rates are taken from the National Highway Traffic Safety Administration. WMATA Metro fatality rates are from news reports on fatalities since 2009; the denominator is half of the average weekday ridership from the most recent APTA ridership report, from Q4 of 2015. (We divided total ridership in half to estimate the total number of individual riders taking two trips per day.) This is designed to create a relatively high fatality rate for WMATA—making a relatively small denominator, of only the number of people who use WMATA on a daily basis—compared to the road crash fatality rate, which uses a relatively large denominator, the total number of people living in a metropolitan area.

Snowflakes come in 35 different shapes. And some of them are really odd. by Susannah Locke
Wednesday December 31st, 2014 at 2:26 AM There's an amazing amount of different types of snowflakes, as this recent infographic from the Compound Interest chemistry blog shows: 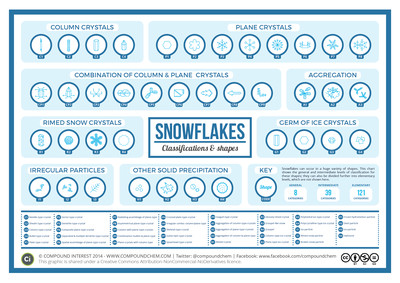 The graphic shows 39 categories of solid precipitation (including 35 different kinds of snowflakes), which can be further subdivided into 121subtypes. And looking at some of those simpler shapes, it's clear that some snowflakes can probably look exactly alike — contrary to popular belief.

Why do some snowflakes shapes seem so different from the "classic" shapes many of us are used to? Certain snowflakes tend to occur only under certain temperatures and humidities — some of which might be more unusual in specific locales. Scientists have been able to confirm this general temperature/humidity trend by making artificial snow in the laboratory: 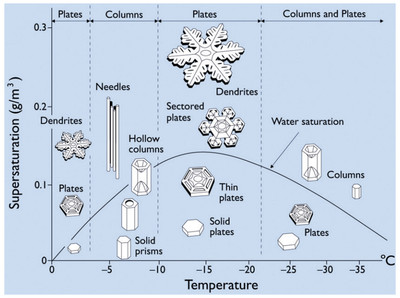 The Shapes of Snowflakes, at the Compound Chemistry blog, which has an interesting discussion of the whole topic

Some awesome photographs of snowflakes, including some of the odder shapes

Caltech physicist Kenneth Libbrecht has a really great site all about snowflakes, including FAQs and pictures

Using a Construction Project to Predict the Effect of a Road Diet by Angie Schmitt
Tuesday December 23rd, 2014 at 1:48 PM

Barbur Boulevard in Portland is one of the city’s most deadly streets, and advocates there have pushed for a road diet that would slow traffic and provide comfortable space for biking and walking. But the state DOT has refused to change the road, in large part due to objections from the local chamber of commerce.

But in an interesting natural experiment, a recent construction project on Barbur Boulevard took a lane out of commission. Michael Andersen at Bike Portland reports that the data from the construction period in many ways confirms what street safety advocates have said all along:

That’s one conclusion from data released Friday that analyzed changes to people’s driving habits during construction work on Barbur this summer. A repaving project had temporarily closed one traffic lane in each direction.

The study, led by the Oregon Department of Transportation because Barbur is a state highway, found that temporarily narrowing Barbur to two lanes at this point had added 68 seconds to the average northbound rush-hour trip.

However, that delay — a slowdown of about 23 percent for the length of this 1.9-mile stretch of road, from about 30 mph on average to about 24 mph — apparently bothered almost no drivers enough for them to switch routes.

Moreover, the proportion of northbound drivers who had been speeding at 55 mph or faster through this stretch during non-rush hours — often by weaving rapidly through midday or early evening traffic — plummeted 68 percent during the lane reduction, according to the same data set used in the study.

Elsewhere on the Network today: Streets.mn says crowded Twin Cities buses might be better off with less seating. Greater Greater Washington shows how Maryland’s rural areas rely on suburban and urban areas for financial support. And Urban Milwaukee reports on the political fissures forming as the city develops its starter streetcar route.

Stockton Street in Union Square Becomes a Plaza for the Holidays by Aaron Bialick
Friday November 14th, 2014 at 3:15 PM

Two blocks of Stockton Street in the bustling Union Square shopping district are being converted into a pedestrian plaza for the holidays. The roadway has been occupied by Central Subway construction machinery for a couple of years now, but now crews are taking a break and covering up the site with sod for what’s been dubbed Winter Walk SF, “an inviting open plaza in the heart of Union Square” that will run until the new year.

The two blocks “will be open for winter merriment with a nightly light art show projected on the Macy’s Men’s Building featuring Jack Frost’s adventures as he spreads festive icicles throughout San Francisco,” states the Union Square Business Improvement District on its website. “Expect caroling, demos and other wintery surprises.”

The pedestrianization project should boost the bottom line for Union Square merchants during the big holiday shopping season. When Stockton was closed to cars in 2011, and remained open to buses, taxis, and people walking and biking, they said they saw a jump in business. However, ever since construction ramped up with cranes, and pedestrians have been corralled into a narrow passage, some merchants have complained that they’ve lost business.

Union Square’s throngs of shoppers could certainly use more pedestrian space, and the Stockton plaza project could leave many wondering why cars should ever return to Stockton in the long run. Stockton and Powell Streets seem like good candidates for transit malls — streets populated solely by people, bikes, buses, and cable cars. SFMTA planners say they plan to look at ways to reconfigure the car traffic flow around Union Square after subway construction ends. In the meantime, it seems that many lost drivers apparently end up on Powell instead of on intended detours on streets like Mason.

Adding space for people and businesses on Stockton, rather than giving space back to cars, seems to be a growing trend during peak holiday shopping seasons. On the Chinatown segment of Stockton, car parking has been temporarily replaced with space for merchant stands and pedestrians during the last two Lunar New Year seasons.

A rendering of the finished plaza, via the Union Square BID.

aaronwebber
I work right next to this block and I am really excited for this, it's going to be great.

Prosecutors in Charleston, South Carolina are arguing that the state's "Stand Your Ground" law doesn't apply in the case of domestic abuse victims who strike out against people they live with. You see, it's for intruders, and it really wouldn't be right to drag this statute into our "homes and personal relationships."

What If The Google Bus Issue Were Actually About Transportation? by Matthew Yglesias
Wednesday January 22nd, 2014 at 1:25 PM

As Kevin Roose says, the thing that makes the Google Bus issue in San Francisco so impossible to resolve is that the tensions aren't about buses at all. But while the SFMTA is empowered to raise the fees that it charges tech companies for the use of bus stops, it's not empowered to do anything about gentrification or income inequality or anything else that people are interested in.

But in terms of yesterday's post about bus lanes, I think it would be interesting to pretend for a minute that this really is a dispute about transportation policy. Within that frame, what's so bizarre about it is that the dispute is so narrow. Basically the issue is framed as corporate buses versus private buses versus perhaps some hypothetical new investment in rail infrastructure. Nothing is said about the private cars in which 34 percent of San Franciso residents (PDF) get to work. That's a lot of people. But it's only a minority of people. And when I visited San Francisco, it seemed to me that the city—like every American city—was dedicating the majority of its road space to private cars. Getting more money out of the tech companies may help San Francisco's transit a little. But money can't buy me love and it can't buy a mass transit agency space in the crowded core of a city.

To do that, you have to take lanes away from private cars. But here's the big problem with transit policy in cities all across America. Options are constrained to things that can be done without annoying drivers. Which is to say you're mostly doing nothing, with a side order of daydreaming about very expensive infrastructure projects. In San Francisco, you're trying to get Google to cough up some money. But what if transit advocates and tech companies teamed up to secure more bus lanes, with the lanes open (for a fee!) to private buses as well as public ones? Then you'd have a win for local public transit and you'd have a win for firms located out of the feasible range of San Francisco transit.

Like any initiative that's actually focused on the bus issue this would totally ignore the really big questions about zoning in San Francisco and the Valley, taxes, income inequality, etc. But that's because there's only so much that transportation policy can actually achieve. What it can achieve, ideally, is better transportation. And the way to get there would be focusing on buses versus cars rather than an intra-bus struggle for the scraps.